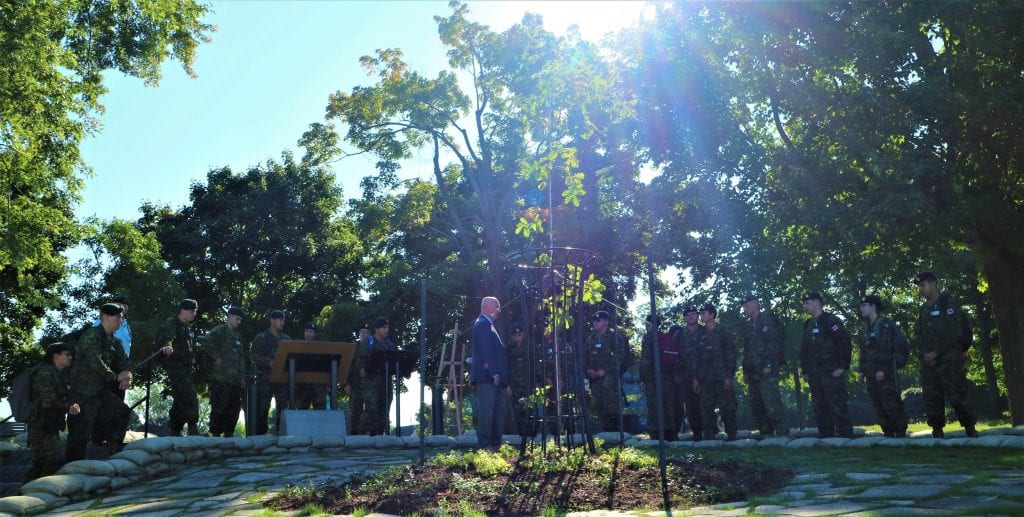 The Oak tree planted here commemorates those Graduates of the Royal Military College of Canada who served at the Battle of Vimy Ridge (9-12 April 1917). Their contribution was significant – RMC graduates provided nearly 23% of the Commanders and Staff of the Canadian Corps at the time of the battle.

At 5:30 in the morning of 9 April, the four Divisions of the Canadian Corps attacked the German defensive line above the Douai Plain in Northern France, advancing into driving snow and rain. By noon, three of the Divisions had reached their objectives, 4500 yards into the German lines – the fourth, 4th  Division was to continue its battles for ‘Hill 145’ which it captured on 10 April, and  ‘the Pimple’, not taken until 12 April. Approximately 81,000 Canadian soldiers were involved in the battle, of whom 3,958 were killed in action or died of wounds after the battle, and 7,000 others suffered wounds.

A gift of the Classes of 1967 and 1973, the Oak is a descendant of acorns gathered on the battlefield from a fallen English Oak shortly after the battle. Collected by Leslie H. Miller (later commissioned in the field in 1918 whilst serving with the Canadian Signals), a school teacher and tree farmer, the acorns were sent home to Canada where they were planted on an Ontario farm gifted to him by his father, (now part of the Scarborough Chinese Baptist Church property). Ten trees grown from the original acorns still stand as part of the woodlot of the original property which Lieutenant Miller called “Vimy Oaks Farm”.